In keeping pace with Apple’s rollout of new features and our initiative to provide best in class support, we have made numerous SKAdNetwork enhancements. We’ve also made important changes to other products in our platform. Read on to see a recap of our Q2 updates.

With SKAdNetwork version 3.0, Apple made it possible for devices running iOS 14.6 and greater to not only deliver an install notification postback to the winning partner but also up to five other partners who had competing ad interactions that influenced the install. Kochava will provide reporting of these non-winning influencer ad signals. The postbacks are differentiated by a new ‘did-win’ parameter, as well as the lack of a conversion value and source app ID on the influencer payloads. Kochava has added support to ingest and verify the new 3.0 payload format, as well as surface the new influencer data in row-level and summary reporting.

For clients who have access to Kochava Query, a new column labeled “did-win” has been added to the skad_conversions table. An entry will show as “null” when the SKAdNetwork version of the postback is earlier than 3.0, as those versions do not contain this parameter. When the version of the postback is 3.0+, an entry will show “true” for winning partner postbacks and “false” for influencer partner postbacks.

Keep in mind, when viewing or ingesting data programmatically from the Kochava Query skad_conversions table, it will no longer only contain winning postbacks. To ensure you don’t overcount won SKAdNetwork installs, filter by did-win = true or null.

Depending on the traffic that is included in the report, the following columns will be added with the corresponding information.

Another update to SKAdNetwork reporting includes the option to view data based on the date it was received. Originally, reports could only be pulled with the estimated install date. Now, there is the option to choose between the two.

The list of Kochava SKAdNetwork certified partners continues to grow. To find the most up-to-date list with testing status, campaign data enrichment details, and more, visit the SKAdNetwork Certified Partners page on our support site.

Are you a partner that’s interested in becoming SKAdNetwork Certified? Learn about the requirements here.

Kochava also introduced support for the AdServices framework to ensure that there are no interruptions in the flow of attribution claims on installs driven by Apple Search Ads (ASA) efforts. The AdServices framework is used to provide attribution on app-download campaigns that occur through ASA and other properties like Apple News or Stocks. It is available on devices running iOS 14.3+.

AdServices will eventually replace iAd, which has been the longstanding framework to supply attribution on ASA campaigns. Kochava has built the integration in a way that attribution data from both frameworks will be ingested in parallel, with iAd being prioritized for attribution and reporting due to the incremental campaign information on iAd payloads. While Apple has not yet set a date for the permanent deprecation of the iAd framework, once iAd payloads are no longer available, Kochava will simply fall back to using the AdServices payloads. This guarantees our customers a seamless transition between the two frameworks..

There are a number of important differences between the two frameworks. The iAd framework did not provide claims on ATT opt-out users, while AdServices will return such claims but without a click timestamp. Upon integrating an SDK that supports AdServices or upon including the AdServices token in your server-to-server feed, you may observe an increase in attribution claims. These incremental claims are for ATT opt-out users. Within the Partner Configuration page for Apple Search Ads, you can configure whether or not you want to consider these claims for the purpose of attribution.

Another important difference is the decrease in campaign data points in the new framework. Apple has primarily focused on removing human-readable values, such as campaign name, while keeping IDs in the AdServices framework, such as campaign ID.

When creating SmartLinks, even if you do not designate a paid media partner in the Media Partner dropdown, you can still designate that the link will be used within a paid media placement. By checking the new Paid Media checkbox, Kochava will consider ad signals from this link to be subject to stricter attribution rules than an owned media link. This is for the purpose of compliance with Apple’s AppTrackingTransparency (ATT) framework policy, which does not allow linking of two different company’s data when the platform is subject to ATT, and the user does not provide consent to be tracked.

Similarly, when creating a new Private Network tracker, there is now the option to check “Paid Media.” When selected, iOS 14+ attribution rules will be applied.

ATT parameters have now been added within primary reports and analytics. This makes it easier to view, sort, and analyze data based on ATT status. The below table outlines the new parameters, their definitions, and potential values. 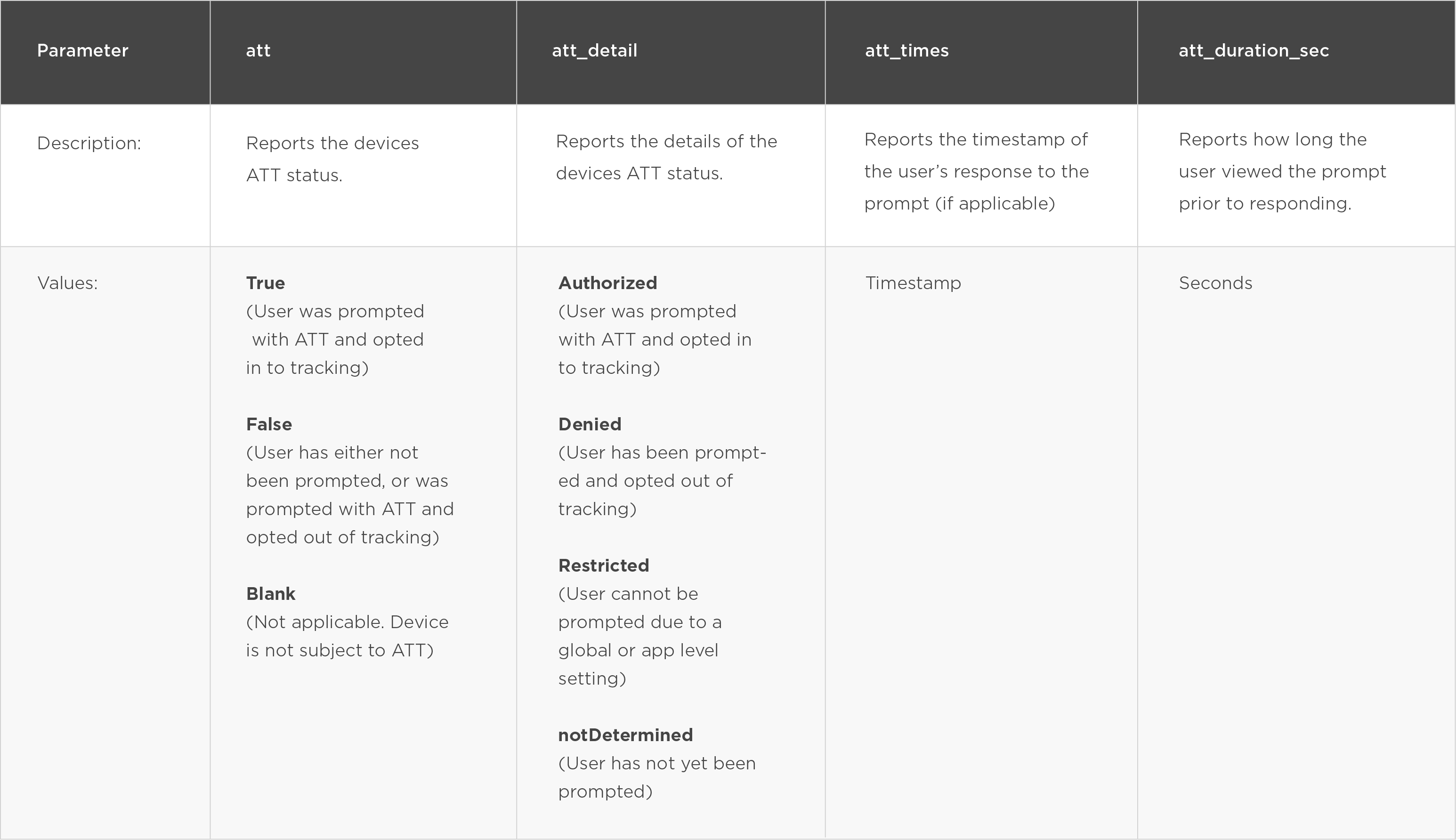 Further, new parameters have also been added to report the channel_type as “paid” or “owned”, and the ad_platform as “m_web”, “in_app”, or “web.” These designations play an important role in determining what attribution is available depending on the user’s ATT status.

If you have questions about these latest product updates, contact your Client Success Manager or email Support@Kochava.com.

Analyzing Your SKAdNetwork Data in Kochava