Attribution is the identification of a set of user engagements that contribute in some manner to a desired outcome and then the assignment of a value to each of these events. The primary elements of engagement are impressions, clicks, installs, and events. Each element has specific criteria which are then weighed to separate winning engagements from influencing engagements.

In mobile marketing, attribution helps advertisers understand what channels and campaigns are driving high-quality users into their app – allowing optimization of media spend for the highest return on investment (ROI).

There are, in fact, multiple types of attribution, but the most common form applied to mobile marketing is last-click attribution. What this means is that in an ad campaign with multiple ad partners, the partner with the last click wins the attribution.

Winning the last click before a user installs an app doesn’t mean other partners in the campaign didn’t have any influence. It’s common that a user saw an ad in a number of locations before taking action and clicking on an ad.

To see which partners were influential and had a touchpoint is what multi-touch attribution (MTA) is all about and may be a valuable way to plan your next ad campaigns. To give partial credit to those influential partners that may have eventually led to an install or conversion is what fractional attribution entails.

Below are more forms of attribution:

View-through attribution (VTA) attributes an install and subsequent post-install events to the impression the user was served.

Deterministic attribution relies on globally-unique identifiers such as device IDs to identify the same user and/or device between an ad engagement and subsequent conversion.

Probabilistic attribution relies on non-deterministic identifiers such as  device characteristics, user agent, and IP or partial IP  address to narrow in on a highly probable, but not exact, match between the user and/or device that completed an ad engagement and subsequent conversion.

A user is scrolling through an app or mobile webpage and sees an ad served by an ad network for a deal redeemable through a pizza chain’s mobile app. The user clicks on the ad, visits the app store to download the app, then launches the app and redeems the coupon – placing an order via the app.

On the backend of this interaction, when the user clicks on the ad, that click is measured and reported back to the advertiser’s mobile measurement partner (MMP). The MMP will also be receiving app install and in-app event data through the integration of its software development kit (SDK) into the pizza app. The MMP processes attribution to link the specific advertisement click to the resulting app install and pizza order using the coupon. This happens at scale across thousands of advertisements across campaigns and network partners, helping the pizza chain to understand what campaign strategies maximize pizza sales.

Since the release of iOS 14.5, attribution on iOS devices has changed. Apple introduced the AppTrackingTransparency (ATT) framework that requires all iOS apps to ask their users for permission to track activity across other companies’ apps and websites. When a user opts out of tracking, iOS apps can no longer perform determinist or probabilistic attribution. This restricts ad measurement and targeting for that user and their device. However, owned media can be used for retargeting because it doesn’t rely on an IDFA.

Privacy is now playing a major role in how attribution is performed and it has the potential to change. Stay up to date on all things iOS with Kochava.

SKAdNetwork (StoreKit Ad Network) is a marketers operating system framework for attribution of mobile installs that protects user data and privacy. The App Store and Apple’s servers verify and certify the attribution. The result is then reported to the network, separated from user IDs, device IDs, and time stamps. When a user clicks on an ad and goes to the store, the publishing app and the network share some basic information to help personalize the experience and support attribution over SKAdNetwork.

To make sure that you can obtain the most accurate attribution possible while still maintaining compliance with Apple, Kochava provides full support on all things Apple and SKAdNetwork. 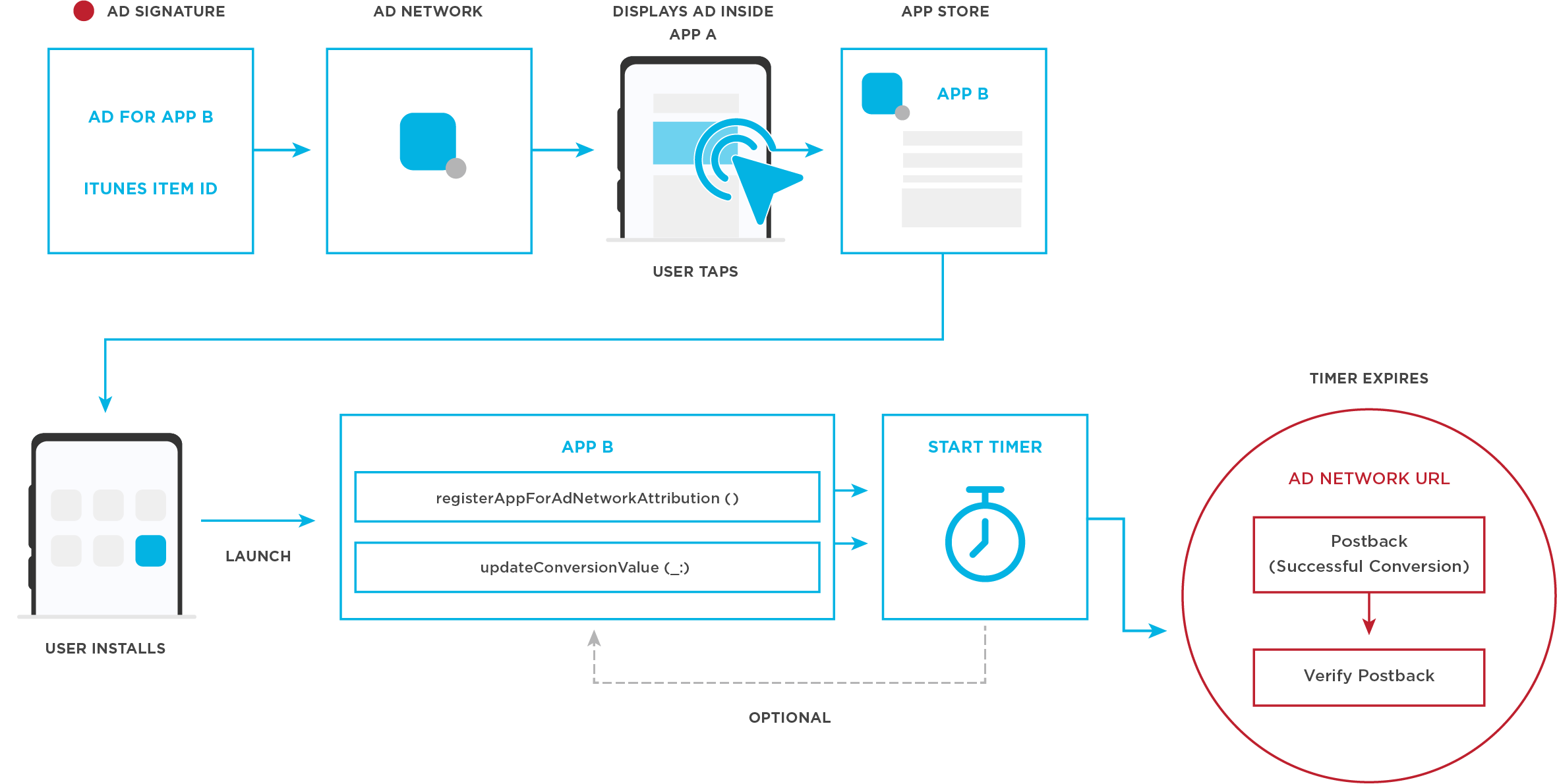 Two kinds of networks look to MMPs for mobile app attribution: traditional networks and self-attributing networks (SANs). Traditional networks rely on MMPs because they lack the necessary capabilities to determine users’ paths from ad interaction within their network to install/post-install activities on their client’s apps. The postbacks they receive from MMPs are used for anything from billing for client campaigns, audience suppression, targeting, or campaign optimization. 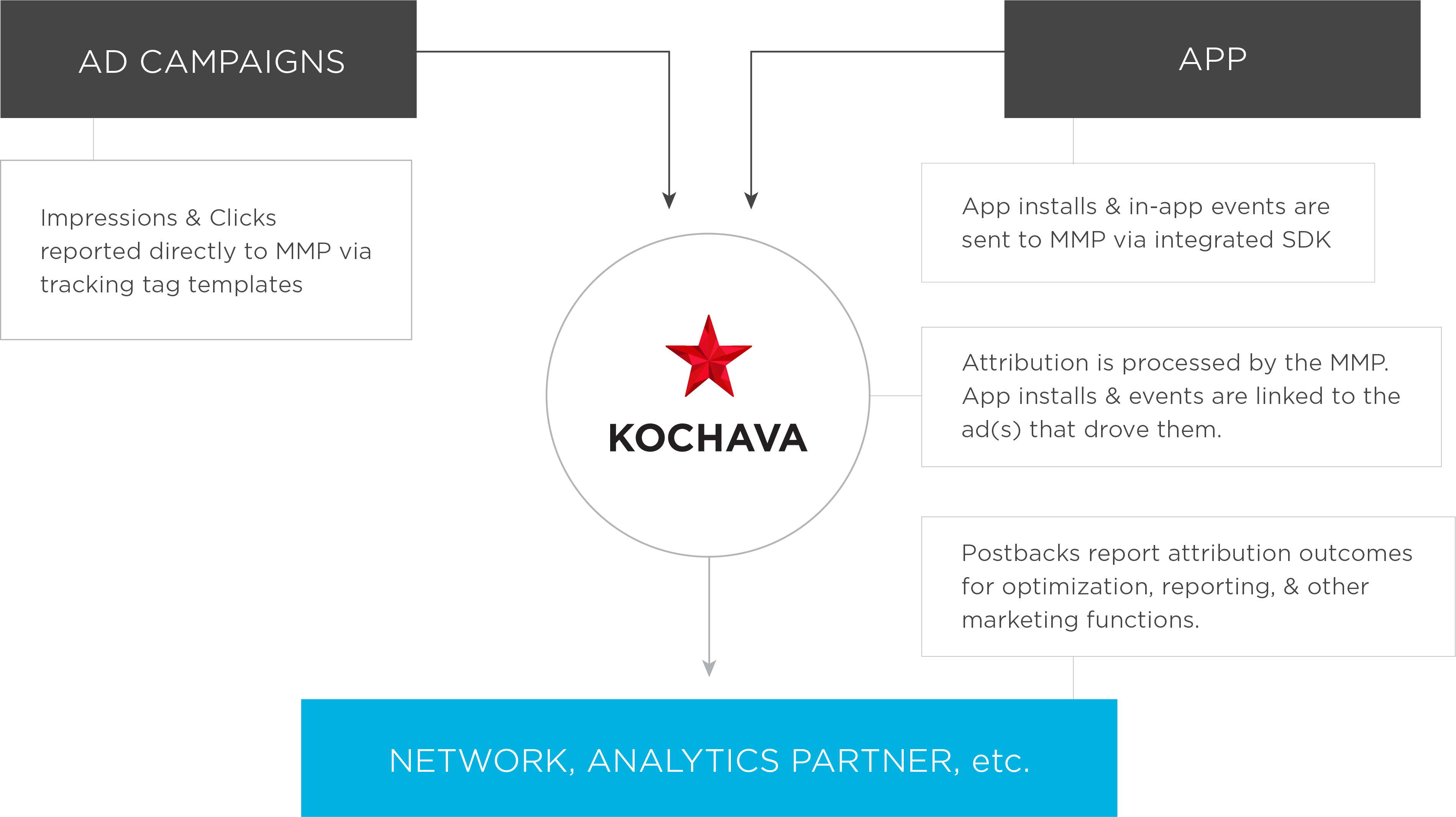 Unlike traditional networks, self-attributing networks (SANs), also known as self-reporting networks, do not share a holistic view of their data. Instead, these super publishers, like Facebook and Google, only share the bare minimum of the necessary information. They offer advertisers access to their user base to market their brands while limiting the detail they share externally on campaign performance and individual users. The term for this is “walled garden,” where advertisers can peer over the “wall” but cannot enter the “garden.” 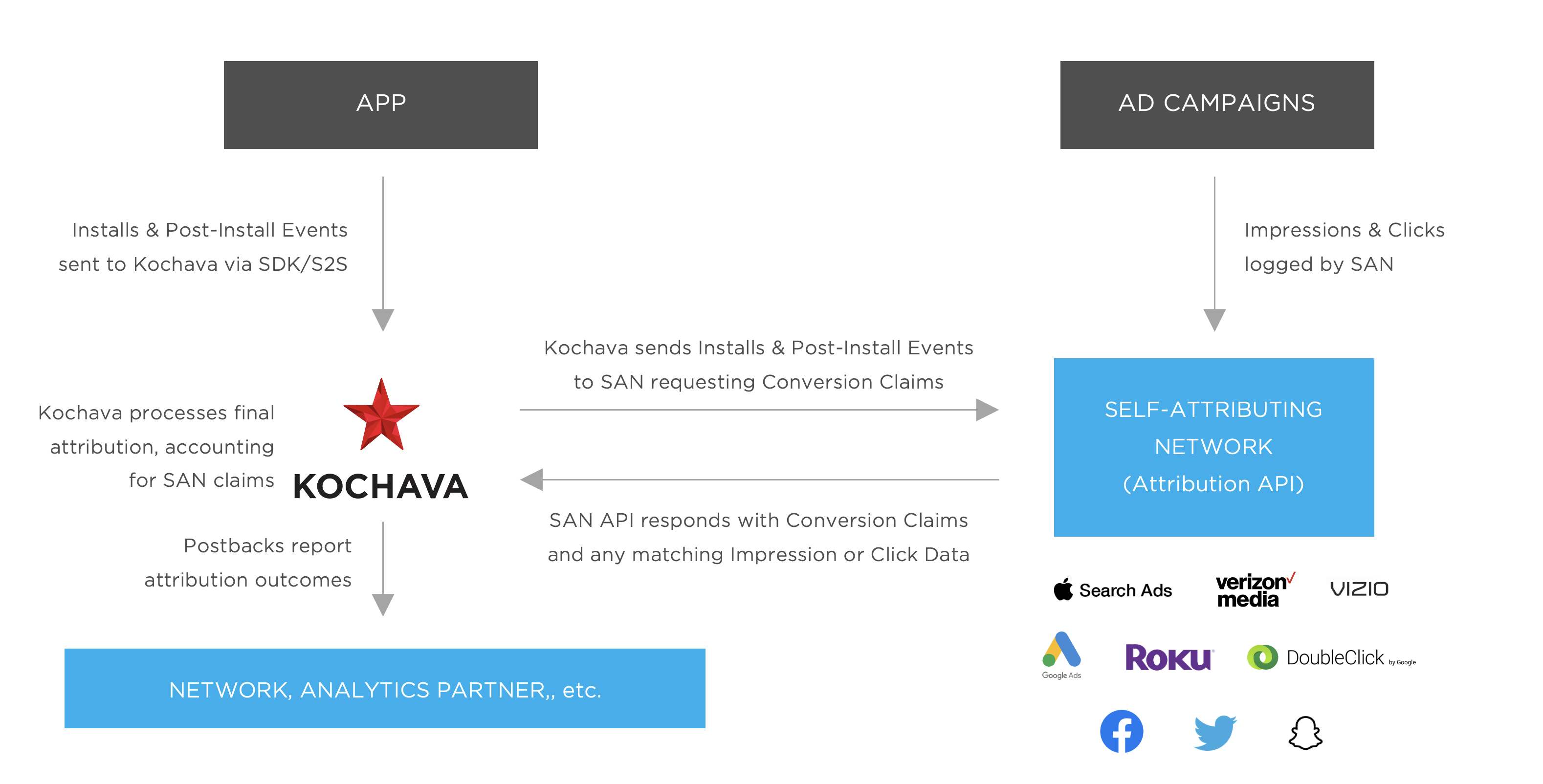 The data flow of SANs is typically inverse of traditional networks. Measurement and attribution partners will receive notification of install/post-install events from the client’s apps, then send in a claim request to any SANs integrated into their system. A claim request is sent to the SAN asking if they have ad data (clicks or impressions) from the same user or device that has triggered an install and/or post-install event. After receiving the claim request, the SAN will send a claim response either confirming or denying an ad interaction through their network by that specific device. That sums up the basic attribution process with a SAN.

What is a lookback window?

A lookback window defines how far back, from the time of install or in-app conversion, to consider engagement for attribution. By adjusting these windows advertisers can customize the balance between attributed and unattributed installs and events, to serve your advertising goals. 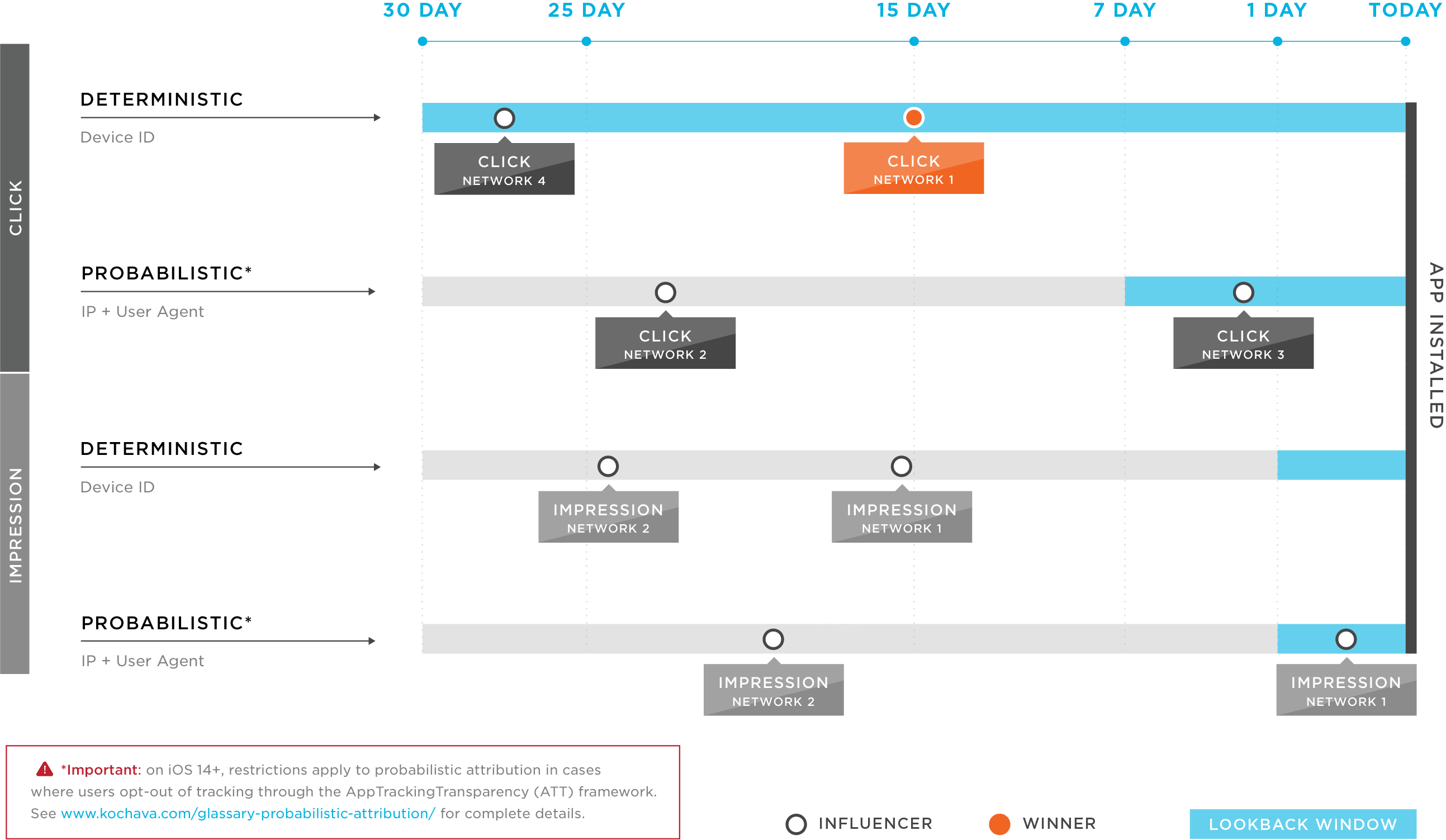 Configurable attribution refers to the ability to customize attribution settings to align with your marketing campaign goals.

By configuring lookback windows for specific campaigns, attribution becomes more causal and accurate – even when probabilistic attribution is the method used. While lookback window defaults vary from 30 days for deterministic-matched click, 7 days for a probabilistic-matched click, and 24 hours for a deterministic or probabilistic-matched impressions,  tightening these windows generally will result in more accurate attribution because they ensure the ad engagement actually influenced the user to perform an action; otherwise, the marketer is likely paying for ads that did not drive/cause the user’s behavior.

Kochava provides holistic, accurate, omni-channel attribution for both iOS and Android apps, as well as all other connected devices. Kochava measures: 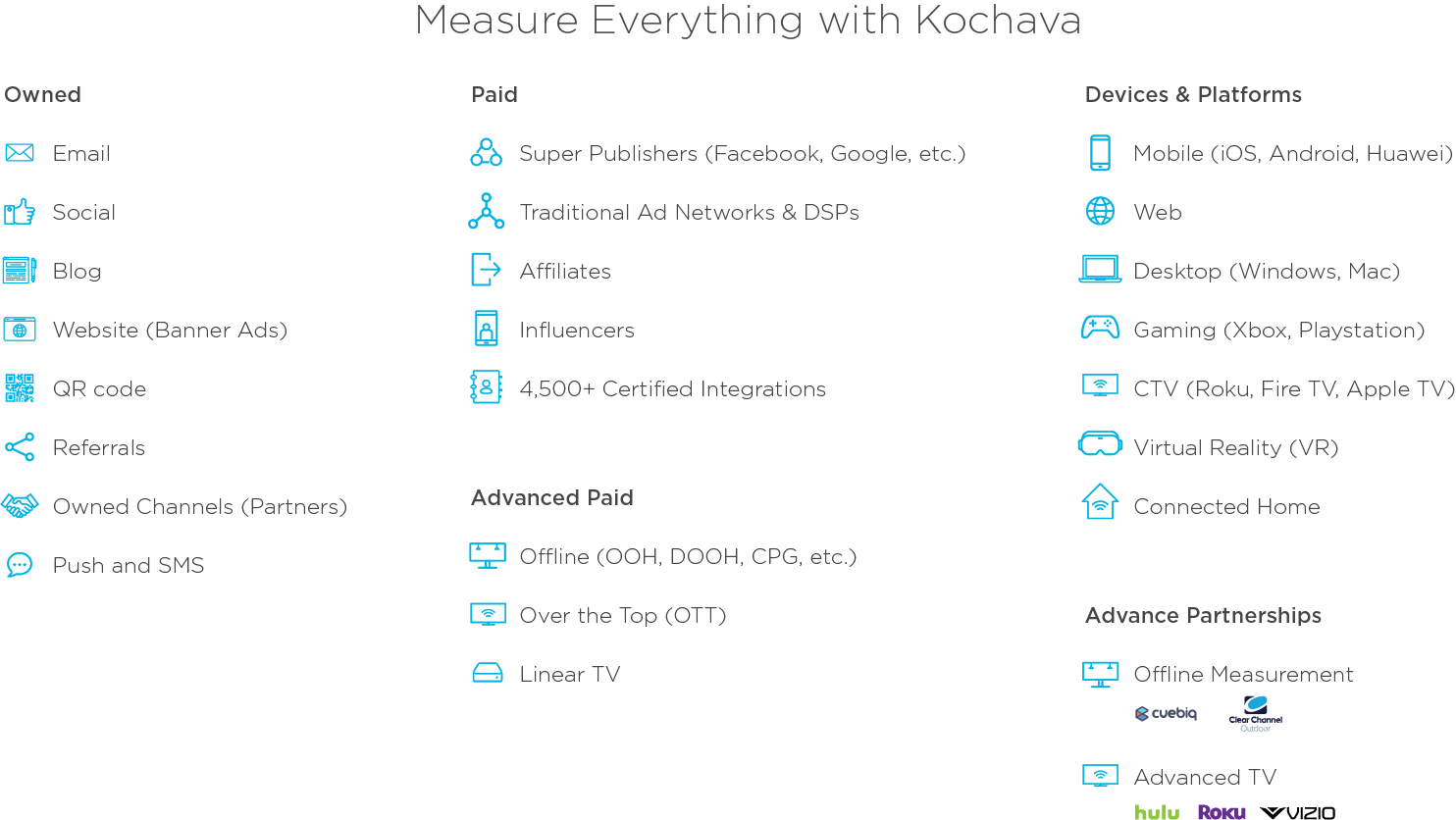 Using Kochava for measurement ensures unbiased attribution across all of your partners. If there is any overlap between your media mix, you can fix it to maximize your unique reach.

View all of our integrations here.

What is SKAdNetwork, and How Do You Use it?

What is SKAdNetwork and How Do You Use I?